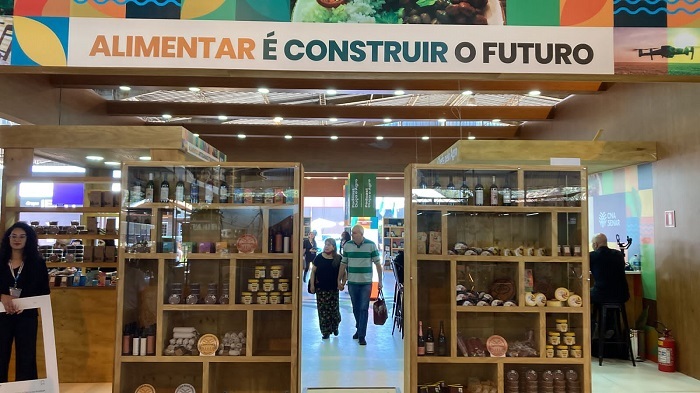 Booth developed a taste, in addition to technical lectures

The visitors to the CNA/Senar system stopped, at the 45th edition of Expointer, in Esteio (RS), used not only the information from the technical lectures, but also got to know and taste the wine, the juice’ fruit, delicious wine and food from artisan and traditional.

During the week, the chefs prepared recipes for the visitors with products from the region, such as yerba mate, an ingredient that Ludmila Gallon uses to prepare bread, pasta, cookies, bread, juice. fruit and sweets.

“This is an amazing opportunity. The use of yerba mate goes beyond gourd and terere. It is a functional food, with nutrients and therapeutic value, it has many uses, and we must evaluate it and use it in food, cosmetics, medicines, and other uses,” said Ludmila.

The retiree Getulio Silveira de Oliveira, from Sapucaia do Sul (RS), participated in the tasting and was surprised by the potential uses of the herb. “I didn’t think you could do much with yerba mate, I thought it was just the mate. I even contacted a chef to get the recipe and be able to eat these delicacies at home,” he said.

Chef Daniel Menezes also prepared recipes for the visitors standing and talked about the importance of this experience. “I met people from all over the country, so it was an exchange of knowledge.”

Claudete Zagonel, from São Leopoldo (RS), followed all the plans and, with a notebook, wrote down the recipes that were prepared standing. “I found this program very interesting, I love to cook, but I had the opportunity to learn cooking techniques because the chef is very motivated”.

Another attraction of the CNA/Senar stand at Expointer is the tasting of red, white, rose and sparkling wines, organized by the Serra Gaúcha Rural Union. It is the small and medium industries that produce beverages in the region that started the service of ATeG Agroindústria do Senar.

The president of the organization, Elson Schneider, said that participating in the fair is an opportunity to promote the development of Rio Grande.

“This great initiative of CNA/Senar System, to bring drinks from our small producers in the Serra, they have given time to develop and sell. Tasting with the food prepared by the chefs is very important,” he said. he.

Professional drinks of producer and sommelier Alana Foresti, from Pinto Bandeira (RS), were used for tasting and display for sale.

Wine was produced, as it happened to many families, for their own use and, over time and generations, the idea of ​​introducing products to the public arose. “We are proud to carry the tradition of producing beer with our name,” Alana said.

Producer Alceu Speranza also showed his beer on CNA and Senar. “The program is important for producers who are starting because many people do not know what we do, so it is an incentive for our production”.

Viticulture at Vinícola Speranza began when Alceu’s Italian ancestors came to Brazil with other varieties to produce their own wines. “With the passage of generations, the production has increased until the production of the agricultural industry, which was registered in 2020”, said Alceu.

Businesswoman Aurelia Pulse, from Nova Petropolis (RS) accompanied the taste and bought the drink that pleased her taste the most. “I’ve already visited a few wineries, so this tasting improved my knowledge.”

At the Expointer, the CNA/Senar System has also promoted the exhibition of art and traditional food. Among the products shown are the 2021 CNA Brasil Artesanal award winning chocolates: C’alma, Chocolate da Ju, Kalapa and Cacau do Céu.

Coffee produced by women from Minas Gerais and Paraná, honey from Santa Catarina, salami, pecan nuts and olive oil from Rio Grande do Sul were sold at the fair. In addition to cheeses from producer Diego Perosa, from Iraceminha (SC), who was one of the finalists of the CNA Brasil Artesanal 2022 Award – Cheese. The products from the Perosa cheese dairy have the Seal of Art.

For rural producer Luiza Bagattini Osório, participating in Expointer is different for the Cinque olive oil brand. According to her, the olive trees were established in 2017, in the lands of Estância Santa Leonida, in Rosário do Sul (RS), but only in 2022 the harvest was enough for business in the state.

“This is the first big harvest, so it’s time to put the products on the market. Last year the crop was small, we only sold to people we know”, he said. Luiza and her husband produce excellent olive oil, obtained from selected olives.

The Zampa Grigia salami brand, by Carlos Barbosa (RS), which took first place in the CNA Brasil Artesanal 2020 award, was also part of the celebration. “For us, from a family farm, it’s a pleasure to advertise our work on the channel. It’s a way to show the family’s commitment and the value of the product”, said producer Bruno Gedoz.